In his provocative New York Times article addressing the MLK memorial in Washington D.C., Dr. Cornel West reminds us that the message of Dr. King, the whole message, is still deeply urgent and relevant today. In 2011, we acknowledge that King’s message addressed racism, but we can forget the complexity of King’s vision, maybe the facets that put the man’s life in the most danger. King preached against the Vietnam War and poverty as animatedly as he worked to dismantle racism. According to West, King talked about 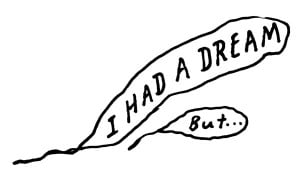 Racism as a moral catastrophe

Militarism as an imperial catastrophe

Poverty as an economic catastrophe and

“Materialism is a spiritual catastrophe, promoted by a corporate media multiplex and a culture industry that have hardened the hearts of hard-core consumers and coarsened the consciences of would-be citizens. Clever gimmicks of mass distraction yield a cheap soulcraft of addicted and self-medicated narcissists.”

The health of America has always hinged on its ability to live into King’s vision of the Promised Land. Sifting through these four foci brings urgency in me of how much work we have yet to do to get there. West’s article sits on the front of my mind and the top of my heart every Tuesday evening as I walk down 125th Street for thirty minutes to catch my train home from work. It is a dirty street, smelling of urine, buzzing with neon lights, and full of people all ages, abilities, races and sizes. I am flanked on my right by store after store selling cheaply made clothes, shoes and cosmetics and on my left by street vendors selling perfume, CDs and jewelry, trying to get by. Meanwhile, I am approached from the front and back with fliers thrust at me without eye contact to buy new phones or melt down gold for cash. I am seen as a consumer before human being. Our materialism has become an unwieldy construct so massive, it is hard to know where to strike first. So lately, I have just put my head down and walked as quickly to my destination as possible, always feeling a little more stressed and empty than when I began.

West proposes that King is weeping from his grave. I think he could be right. I would deeply agree that materialism is a spiritual catastrophe, and it is getting worse instead of better. We must claim our citizenship, our stock in the human race, and keep working to end poverty, materialism, racism and militarism until together we reach the Promised Land.